For those of you that may not have heard about it, it’s a day for recognition, conversation understanding, and support. It’s a day for checking in with your friends, family, coworkers and asking the question ‘R U Ok?’. The concept is to generate a conversation with somebody who might actually not be okay, and prompt them to talk about what’s concerning them; what’s weighing them down; what’s making them feel sad etc.

It’s by facilitating this conversation that somebody might have a better opportunity for ‘opening up’ rather than continue suffering in silence and keeping their problem(s) to themselves, in turn creating more issues.

Whilst I think it’s good to create a national campaign and a social ‘movement’, I don’t think it’s something that should be predominantly advertised and spoken about on just one day. It’s a conversation starter that should be had on a regular basis, well, providing you’re a decent human being who actually gives a shit about other people. And no, asking somebody if they are okay, before commenting on their hairstyle or fashion choices doesn’t count. 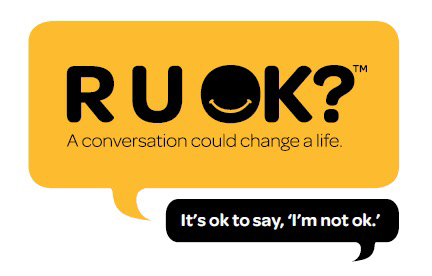 Browsing social media today, all I saw were posts about it. Images like the one above and all these people on my feed were making comments about ‘asking the question’ and ‘having the conversation’; linking to the RUOK website, and using #as #many #hashtags #as #possible, because #socialmedia.

But there was one post I saw that really struck a nerve, and it went along the lines of:

‘Well, actually, no I’m really not, I’ve been feeling…’

‘Okay my work here is done’

‘But I haven’t even told you what’s wrong’

And I realised that there were actually a number of people making posts about this day, that immediately fall into that particular category. The people who want to portray an image of being socially / morally responsible and caring etc, but really just do it to look good and ensure they get enough likes for their own validation and self worth. They are the sort of people that ask the question without any actual interest or concern in how the other person is feeling (when sometimes I think they are the ones who should be asked the question… ‘R U OK? I’ve noticed that you’re constantly concerned with how many selfies you’re posting on Instagram, and I’m concerned that you have absolutely zero self worth, and instead are trying to find self worth and validation from countless numbers of absolute strangers on the internet… ‘

Millennials and social media narcissists… I’m look at you!

Personally speaking, I’ve also found that a number of the people publishing these posts are also the people with the biggest gossipy mouths, so are automatically the WORST people to be having such sensitive conversations with, because that then works to their advantage within their social circles, and gives them plenty of gossipy ammunition with which to talk about you behind your back.

And for anybody that has previously, or is currently, going through a tough time, having people talking and gossiping about you behind your back is only going to make things worse.

Let’s pause for a moment. Could this sense of hostility possibly be coming from previous personal experience? Perhaps?

Could it be based on observation of actual human behaviour within certain social circles? Absolutely.

Do I perhaps have trust issues with people from previous experiences? Undeniably.

Could this be making me sound quite biased? Shut up – nobody asked you!

To avoid any confusion moving forward, I’ll openly admit that I don’t currently classify myself as okay.

So there I am, sitting at my desk watching these posts pass through my newsfeed and each person that mentioned RUOK? I asked myself whether I could (a) comfortably open up to them about what is on my mind, (b) could I actually trust them enough to have a REAL in depth conversation with me about what’s wrong, or (c) would they just pass the buck and be like gurl, you just need to go see a #shrink or something, because you are #BatshitCrazy which completely defeats the purpose of the whole concept.

I’m not denying that there aren’t people in my life that I could open up to, but I’m not entirely sure I could trust them with the information that I would be divulging. Should I maybe go see a professional instead? Absolutely. However, that shit is ridiculously expensive, and it’s a luxury I simply cannot afford right now.

I, for one, can confidently say that if I ask you if you’re okay, I’m genuinely concerned about your response. I care about your wellbeing. Even if we might not necessarily be close friends. Sometimes you mind find it’s actually easier to speak to somebody outside you’re social circle, or working environment / industry, to be able to listen to what you have to say, and then be unbiased about it. Sometimes we need somebody to play Devil’s Advocate. Sometimes it’s easier to open up to a stranger. If you ever feel like something has got you down, I’ll always make time to hear you out and provide support, and know that whatever is said between us will remain between us. Shoot me a message and I’ll organise a time to talk!

I care about those suffering from mental illness. As somebody diagnosed with Depression and Anxiety, I completely understand anybody who says they’re having a rough time, or they’re feeling depressed or sad etc. I sympathise because I’ve been there. I’ve hung out with the Black Dog a number of times before, and am currently hanging out with him.

For anybody that is serious about asking somebody R U OK?, I would highly recommend watching this video before hand to be more consciously aware of what you could potentially be getting yourself into. Having somebody trust you enough to really open up for you is more than just unwrapping a bandage and showing you a wound; it’s breaking the stitches and cutting through the scar tissue to really get into it in depth. This is something that makes the person feel extremely vulnerable; baring their soul. For the person asking, it can become an extremely uncomfortable and confronting position to be in so I would suggest you make sure that you’re committed and ready enough to ask the question, because it’s so much more than just asking the question. It can open a can of worms and show you a completely different side of somebody that you never thought existed, but they need to know that you’re there to support them no matter what.

We all need to feel supported, especially at our most vulnerable.

So please don’t just let RUOK? be a question reserved for one day of the year. Don’t let it be the reason you’re trying to get attention and likes on social media. Ask the question on a regular basis, but actually mean it when you ask. Pay more attention to the people around you, and if you notice a change in behaviour, don’t ignore it. Confront it.

It could change a life. But not asking could cost a life.